One of the things we love most at Engaging Education is a challenge and, in March 2021, FutureGoals (part of the West Yorkshire Combined Authority) set us just that: to create a virtual careers event like no other. Due to an incredible response from the public, preparations for the event took on a mind of their own and our incredible Media and Digital teams pulled out all the stops to support FutureGoals in creating another inspiring and engaging careers event.

The virtual event, christened ‘Inspiring Journeys’, aimed to encourage young people to think about possible career pathways by highlighting varied routes into employment. This would be achieved by uploading self-filmed and professionally-captured videos to the site in which individuals at various stages in their career journeys would explain their pathway so far. Inspiring Journeys was to take place in late May 2021, meaning a tight turnaround for filming, editing and uploading videos as well as populating the rest of the site.

Throughout April and early May our team worked closely with FutureGoals to carefully plan how the site would look and how users would navigate the event. Though all these preparations went smoothly, the success of the event was heavily reliant on individuals from across West Yorkshire filming and submitting their own videos to feature on the site. The risk of not receiving enough submissions to fill the event caused some concern across both teams, and so EE Videographers set to work filming as much content as possible to ensure that the site was well-populated.

Incredibly, we received almost 90 self-filmed video submissions from across the region, with individuals from a range of sectors and backgrounds offering to share their experiences. Add to that the 25 professionally filmed videos and the 46 films we were able to re-edit and repurpose from previous FutureGoals projects, and we found ourselves with a new challenge: editing and uploading 160 individual videos in the space of two weeks.

This was one of the biggest challenges we had faced as a team and took our teamwork (already something we are incredibly proud of) to another level. Our two Video Editors, Tom and Kurt, initially set about dividing the content and editing the raw files into professional and visually interesting films. This was helped hugely by Tom’s pre-emptive work earlier in the month creating templates to slot footage into. ‘Balancing eye-catching motion graphics with easy-to-use templates was a challenge,’ he said, ‘but that was nothing compared to the herculean task of actually producing the videos.’

As submissions continued to pour in, it became clear that this was not a two-person task. ‘While we were expecting a good number of submissions, the amazing response we received was unprecedented,’ said Tom. ‘Dealing with the sheer volume of content was a little hectic at times, but the team really pulled together.’ In the end the whole of the Media team – Tom, Kurt, Emily, James and Greg – got involved in making sure as many videos as possible were edited ready for launch.

However, editing the films themselves was only part of the job. Once completed, videos had to be uploaded to the Inspiring Journeys site with thumbnails, titles and tags so that users could easily filter through the content based on pathway and sector. This was where Niamh – our Digital Marketing Executive – came in, taking links and tags from the Media Team’s handy spreadsheet and meticulously loading them up onto the site quickly and accurately to bring the site to life. 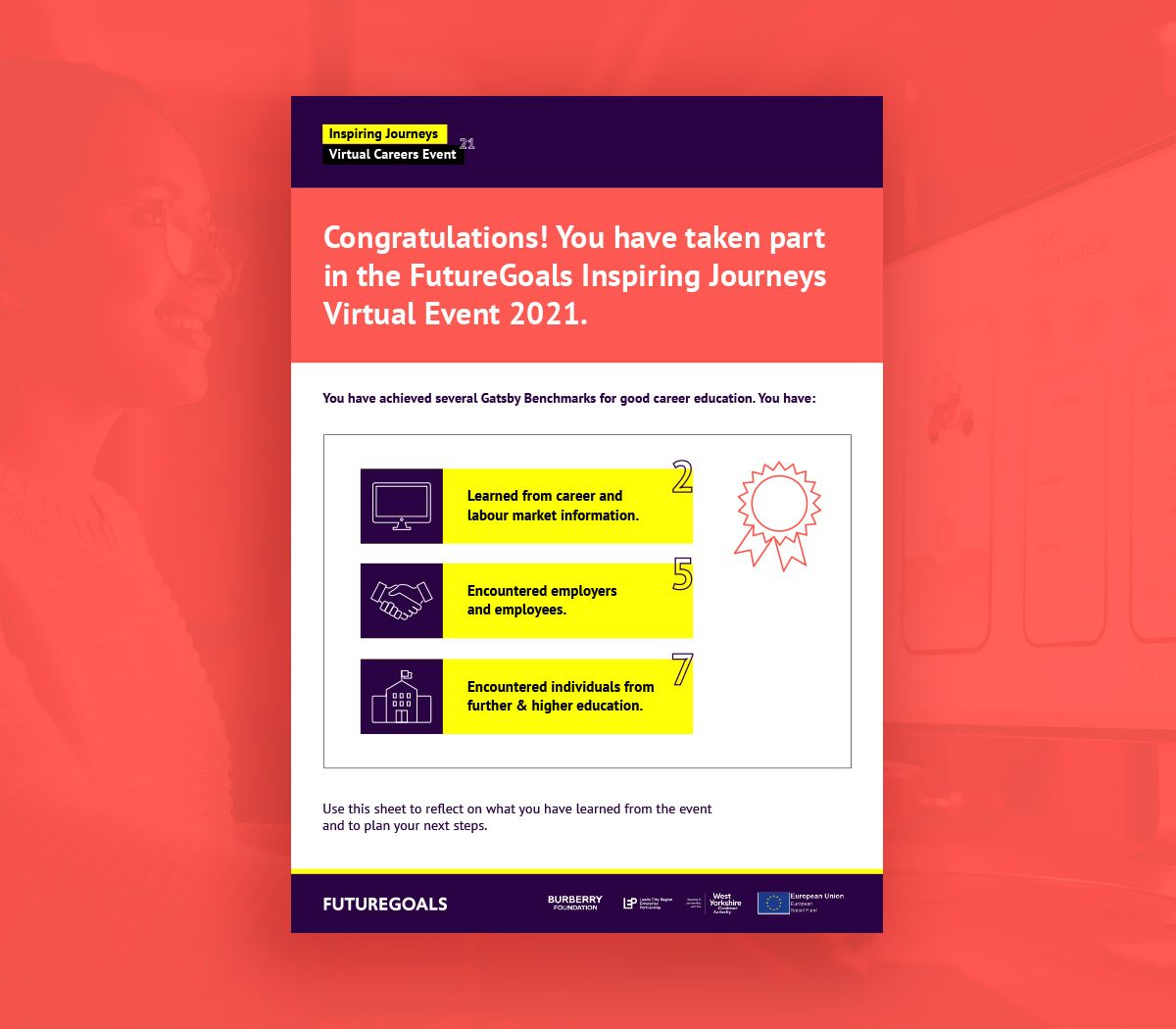 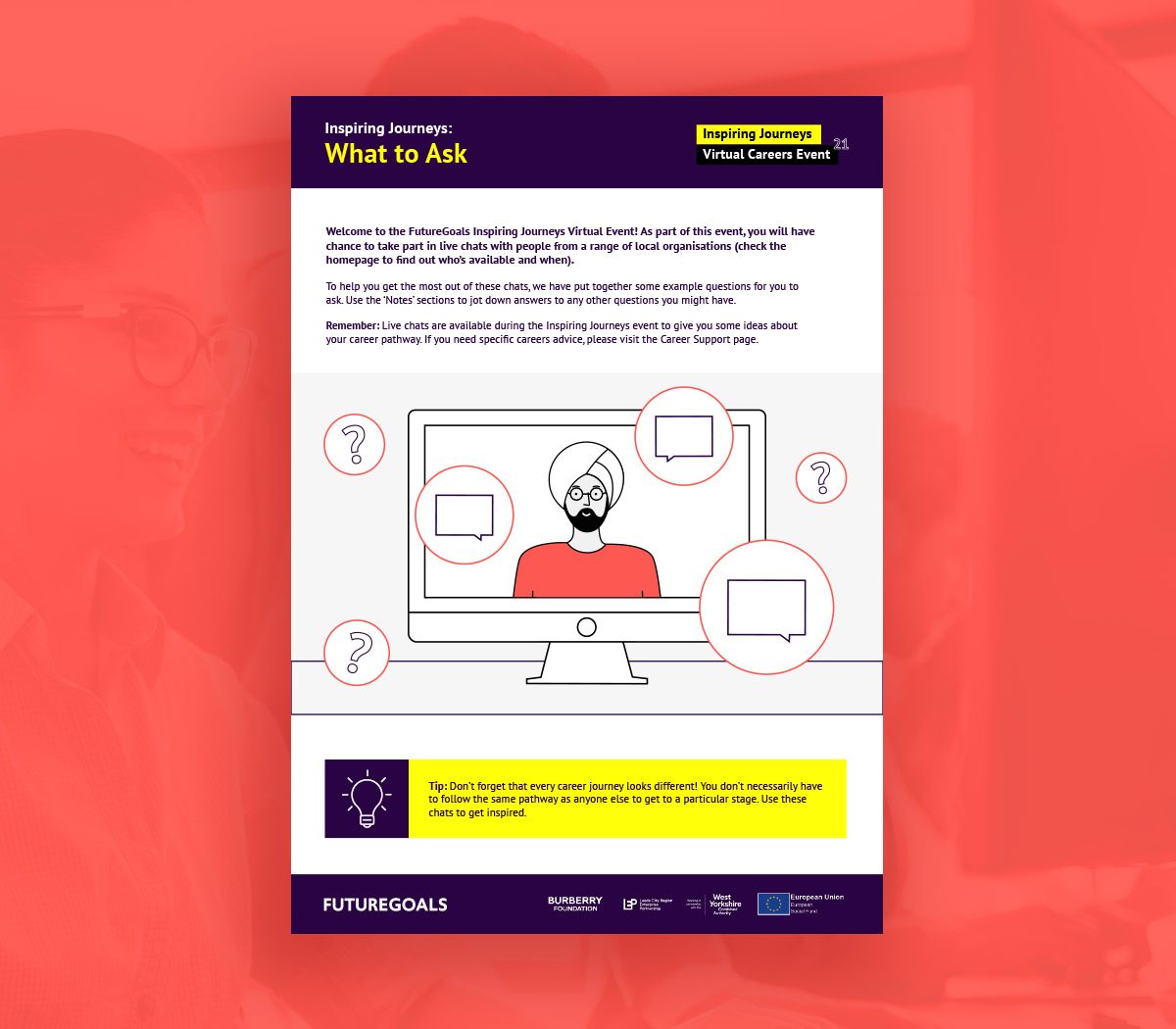 The final result of this enormous effort from the team was another fantastic resource for young people and careers leads within Leeds City Region and across the country. The team is extremely proud of the final result and pleased with the engagement from the public, with Niamh saying, ‘We received an impressive number of responses from local businesses and professionals, and it was great for them to donate their time to speak with students through the website. I think we created a brilliant platform and resource with longevity.’

The Inspiring Journeys website is still live and accessible, and we will continue to add more videos as final submissions are edited and uploaded.

We are proud to continue to support FutureGoals in their goal to support high-quality careers education and training for all.

Get in touch to find out more about our services.

Back to News & Thoughts

Our e-newsletters showcase some of the latest projects we’ve been working on as well as thoughts and features from the studio. Fancy it? Just enter your email below: